Team playzooki is basically known as the "would have, could have, should have" team. He spends half of his time making shitty paint bots, along with half assed cad designs that are thinner than your average sheet of paper. The other half is spent on making endless memes that no one has ever heard of. Sometimes he does both hobbies at the same time. Despite winning a championship, Playzooki couldn't care less about RPing, even if his life depended on it. He now speaks of his retirement, and yet continues to enter bots out of boredom and a secret desire to be loved and wanted.

At this point, with the decline in relevance of Assbees, Playzooki has actually taken on an important role within the community as the one that we all agree to hate. This acts as an essential unifying force, and without it, ARC would likely tear itself apart within minutes. 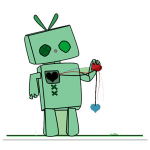